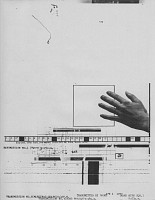 William Larson's Fireflies series (1969–1978) were some of the earliest digitally generated works of art. Larson utilized a technology new to the time to present a dynamic way of image making that extended the vocabulary of montage.

Larson conducted the technology to produce an almost random juxtaposition of dissimilar images. The symbolic, or poetic, potential of the juxtaposition references "the imperfect operations of memory or dreams."