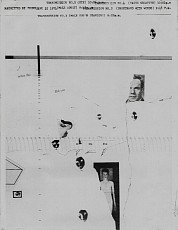 After 40 years, I’m still in awe of William Larson’s Firefly images. I first encountered them in 1977 when I began working on a chronicle of photography at the Institute of Design (ID) in Chicago, The New Vision: Forty Years of Photography. Larson’s faxed images became a quintessential and exemplary art of my traveling exhibition that originated at the Light Gallery in 1979 and in the subsequent book, published by Aperture in 1982. How time flies!

Fireflies in themselves are light in motion. Catching them is about timing (a quick hand) and image making is about all three—time, light and motion. In a single transmission, William Larson caught something new about this relationship that hadn’t been seen before in six-minute transmissions of collaged and montaged images using a Graphic Sciences DEX 1 Teleprinter in 1969. He sent his imagination flying into a new world of transmission.

Before there was email or the Internet, there was the revolutionary fax machine.

Each unique, grayscale print combines graphic marks and photo collage to produce a visual stutter of image, text, and line; like a cross-section of a hurricane, Larson’s work highlights possible instants in the continuum of images electronically whirling around us everyday.

These startling black-and-white images where made electronically four decades ago, using signals transmitted by fax machines.

In art, as in life, timing can be everything. William Larson’s collages, done with the electronic aid of teleprinters, were out of step with the photographic majority when he made them between 1969-75. Now, they arrive for exhibition in New York as many younger artists involved with photography are bored by realism and once again in the throes of an obsession with process and non-traditional image making.