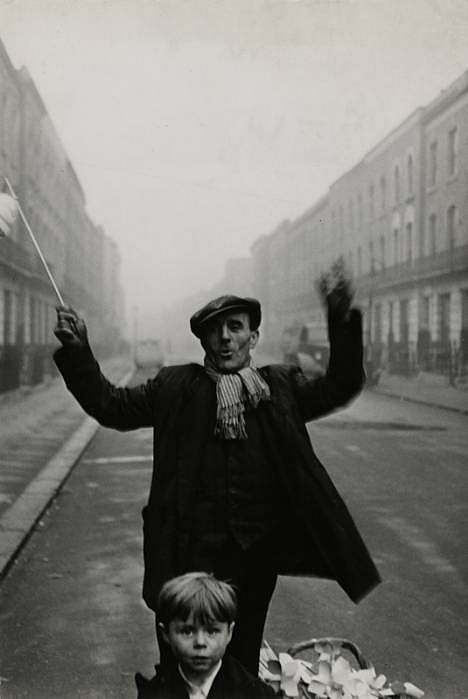 This exhibition of the renowned British photographer Roger Mayne (b. 1929) includes vintage black and white from his seminal body of work on the working class neighborhoods of post-war London, as well as rare early work.  Many of these images are being exhibited for the first time.

Mayne first became interested in photography while studying chemistry at Balliol College, Oxford University from 1947-51. In 1953 he developed an interest in the St. Ives School, which embraced the abstract avant-garde movement, and became friendly with the painters Terry Frost, Patrick Heron and Roger Hilton. Mayne consciously printed with high contrast to emphasize the formal qualities in his work and increased the scale of his prints to have a further dialogue with the painting of the time.

In 1954 Mayne moved to become a photographer, but it was not until 1956 that he discovered Southam Street.  It was a street in a working class neighborhood of West London that would be demolished to make room for high-rise apartments.  During the five years Mayne photographed there, it was full of energy: teddy boys, jiving girls, and kids playing in the street.  Mayne also photographed other streets of West London and similar working class neighborhoods in Britain. For Mayne even the empty streets and dilapidated buildings had “a kind of decaying splendor.” Though modernization ended community life in the streets, Mayne’s work preserves the spirit of that time.  By 1959 Mayne’s images were so indicative of this period that Vogue used them to illustrate teenage styles.  Colin MacInnes used one of his images on the cover of Absolute Beginners, a novel told in the first person by a teenage freelance photographer living in West London that commented on the youth culture of the time.

Throughout this period Mayne worked as a freelance photographer and his photographs were reproduced regularly in magazines and newspapers.  His work was included in group exhibitions at the Combined Societies, a progressive group of local photographic societies in Britain that broke away from the Royal Photographic Society.  His work was also included in Otto Steinert’s Subjektive Fotografie in Germany, a series of group exhibitions and books of international photography that emphasized personal expression and the aesthetic potential of the medium. Mayne had solo exhibitions in 1956 at the George Eastman House in Rochester, N.Y. and at the Institute of Contemporary Arts in London. As early as 1956-57 the Museum of Modern Art, New York and the Art Institute of Chicago acquired his work.  His solo exhibition at the Victoria & Albert Museum in 1986 and the subsequent use of his images on album covers and concert backdrops for the musician Morrissey in the 1990s renewed interest in his work.  Mayne’s photographs are now included in numerous private and institutional collections worldwide.  Most recently, Mayne’s work was featured in Art of the ‘60s at the Tate Britain in 2004, Making History at the Tate Liverpool in 2006, and How We Are: Photographing Britain at the Tate Britain in 2007.