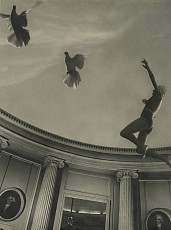 Surrealism seems to have been a consistent undercurrent to Jahan’s vantage point, and many of the images here push further toward the visualization of unconscious impulses and fears. While a doll’s head hanging by its hair from a nail and a violin sliced in half fit into well worn Surrealist tropes, some of Jahan’s collaged works are more expressively inventive, with flying bodies transformed into birds and an x-ray syringe intertwined with a handgun for effect. Jahan’s later work in the commercial arena also employed these kinds of techniques, in a detective novel cover with radiating target-like circles and a pharmaceutical ad with a transparent glass figure. He also re-imagined sculptural stone faces and bodies, exaggerating their drama or introducing them into street scenes like strangely lithe passersby. 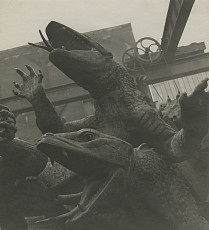 Taken in 1941 by the late French photographer Pierre Jahan, the photos in La mort et les statues are like something from a bad dream. Dismembered statues and gargoyles appear against an incongruous background of industrial machinery, plunging the viewer into a world of shadow and stone.

Jahan produced the prints in Nazi-occupied Paris, where sculptures had been seized from their public perches to be melted down for metals to aid Germany’s war effort. These grotesque figures seem to emit a silent expression of pain for the surrendered city.

The images showcase Jahan’s remarkable ability to merge reportage and Surrealism, a slippage he described as “a kind of drift similar to dreaming”.