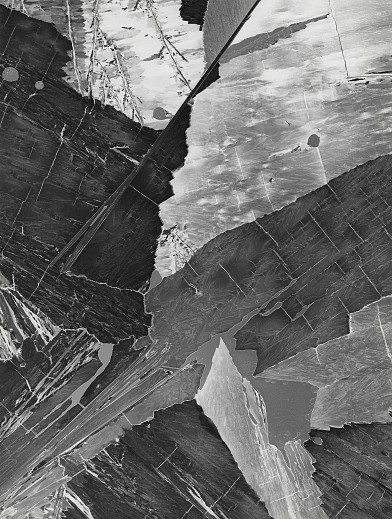 In celebration of the centennial of his birth, Gitterman Gallery is proud to acknowledge the distinctive art of Jean-Pierre Sudre.  A masterful technician in the darkroom, Sudre employed and created innovative techniques that amplified the abstract and suggested both spiritual and metaphysical concerns.

Enamored by the wonders of nature and the possibilities of photography, his investigation began in the early 1950s photographing nature. His work evolved to evoke nature's infinite textures and patterns. In the 1960s, he took his explorations of nature toward the micro, creating crystals on glass plates that he would use as "negatives." Sudre employed the Mordançage technique on many of these prints, which he invented based on a late nineteenth century process known as etch-bleach.

Once a fully processed gelatin silver print was immersed in the Mordançage solution, the print became bleached, and the areas with the most silver (the most exposed and thus darkest areas of the image) would swell and lift off the paper base. Sudre would then wipe them away, leaving an outline of the latent image. Next, he would thoroughly wash the print and redevelop it. He used a variety of developers in differing ratios, often making his own photographic chemistry. He was therefore able to achieve a range of colors from the various toners he used and by letting the developer oxidize.

His dynamic and expressive use of color became an integral part of his work. Sudre emphasized the symbolism in his work with his titles and by the 1970s he had begun to combine cliché verre images with photograms and even found illustrations.


"Sudre’s experimentation, which continued until the early nineteen-nineties (he died in 1997), remained marvelously various, ranging in tone from psychedelic to scientific. It should be mandatory viewing for the new school of young photographers investigating the pleasures of the darkroom." — Vince Aletti, The New Yorker, March 14, 2016


When I was first approached by Jean-Pierre Sudre's daughter in 2014,  I told her Sudre's work was not for me. I had only viewed it in a book, so she persisted and promised me I would have a different reaction once I saw the work in person. After agreeing to meet in Paris during Paris Photo, I had my first opportunity. I remember my heart filling and my eyes watering as I looked up at her after viewing the prints. I have never been so grateful for being wrong. — Tom Gitterman