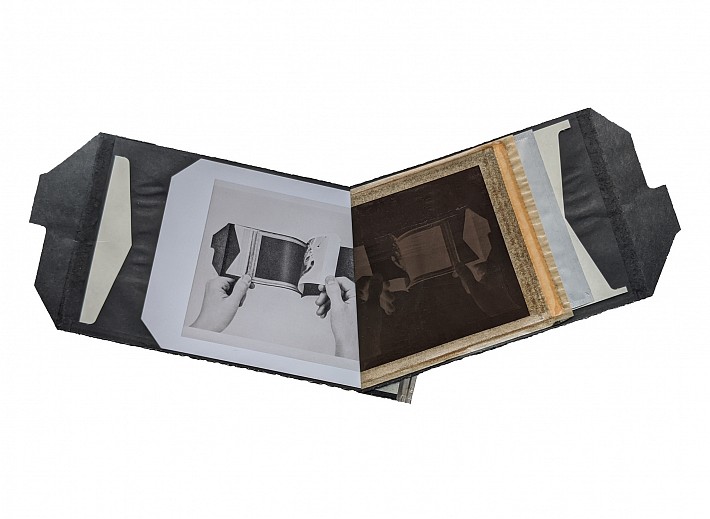 For galleries representing older artists who are no longer making much in the way of new work (or estates of deceased artists for that matter), one approach to refreshing interest and creating new discussion is to present a treasure trove selection of rarities, variants, and other under known or overlooked works. Like listening to outtakes or live sessions from your favorite band, seeing these works broadens the well-known main arc of an artist’s story, and digs deeper into variant ideas that the artist was exploring.

Gitterman Gallery has put on several noteworthy shows of the work of Kenneth Josephson over the past decade, highlighting different subject matter themes and conceptual approaches in shows in 2010 (reviewed here), 2013 (reviewed here), and most recently, in 2016 (reviewed here), so the through line of Josephson’s contributions to the medium of photography over his long career have already been decently well articulated. The impetus for this show is the recent release of a group of vintage works that had never before been available for sale, or had been held back for one reason or another, and these rarities provide alternate doorways into many of Josephson’s most important and innovative bodies of work.

Several of the works find Josephson experimenting with nesting images with images, thereby upending our sense of a particular photograph showing us the singular “truth” of the situation. He hangs several prints of light bulbs in different stages of brightness underneath the actual lit bulb, creating a time series within a single image. He places an image shot upward toward treetops amid a pile of leaves underfoot, twisting our sense of direction and orientation. And his son Matthew holds an upside down image of himself over his eyes, confusing our sense of elapsed time; Josephson then takes that idea one step further in a pair of images where baby Matthew is seen swaddled in his father’s shadow, and a decade or so later, that very photograph is placed once again in his father’s shadow (now with a cowboy hat), iterating the layering once again.

In a related group of works, Josephson pushes the physicality of the photographic image/object dichotomy by combining images of objects with those objects themselves, often with an element of visual trickery. A simple pairing places an actual feather on top of a photogram of that same feather, the inversions of space and time made elementally straightforward. More perplexing are a group of filmholders that house negative images of those same filmholders holding images, the twists and reversals more complex and nested than a quick glance might initially reveal. The same is true of a peel back Polaroid Type 55 print still in its sheath, the image revealed inside puzzlingly showing the same process of pulling back (apparently taken from a photo manual); it’s an elegantly brilliant visual mystery, seemingly effortless but so very smart.

Josephson considers the passing of time more directly in collages made of the Chicago skyline that combine his own photographs with old postcards. Cut into geometric blocks that overlay his black-and-white scenes, the colored postcard fragments take us back in time, to a point when the buildingscape (the walk along Lake Michigan, or the bus station) was visually different. The result is a hybrid time-sliced vision, where yesterday and today tussle for dominance in a single frame.

And within each of these techniques, Josephson is also having a robust dialogue with the history of photography. He holds a picture of clouds up into a gray sky, loosely referencing the 19th century technique (employed by Le Gray and others) of using two different negatives to add cloud drama to long exposure landscapes and seascapes. He measures mountain ranges and skyscrapers using hand held ruler like O’Sullivan did, and merges a Frith pyramid (as an unrolled paper print) into the Chicago skyline. And he alludes to Muybridge’s four hooves off the ground horse gallop experiment by tossing four horseshoes into the air against a numbered backdrop. For the photography insider, each of these is a knowing game and an homage, Josephson’s witty engagements never feeling heavy handed.

This well-edited show doesn’t change any of our conclusions about the obvious intelligence in Josephson’s work, but instead acts like a welcome refrain, bringing some of Josephson’s primary innovations back to our attention for another round of savoring and recalibration. Especially as seen in some of these lesser known works, Josephson’s cleverness and thoughtfulness about photography is remarkably deep; even efforts that we may have overlooked prove to be just as perplexingly magical as some of his best known masterworks. While these images turn us back inward toward photography itself, their braininess never overwhelms their playful risk taking.